How it all began…

The Bournemouth and Boscombe Light Opera Company, or BBLOC as it has become commonly known, was founded by the late Arthur Ball in 1954, together with Freddie Smith and Ray Taylor. Our first two shows, 'Katinka' and 'Night In Venice', were performed at the old Hippodrome Theatre in Boscombe, moving to the Pavilion Theatre in 1956, which has been our main performing venue ever since.

The company has also performed numerous concerts over the years, both at small village halls, where we may have been asked to perform, or at large venues, such as the Winter Gardens or the Pavilion. As a result of the shows and concerts, the company has been able to donate a large amount of money to charity over the years.

As Arthur Ball wrote in one programme:

"During the years, we have endeavoured to give our patrons evenings of great enjoyment and shows of the highest possible achievement in presentation, variety and performance. A feature of our company over the years has been the wealth of principal talent and, with the influx of new young members, the company can look to the future with great confidence." Those Patrons who have seen our recent shows will realise that these words, written some time ago, are still true today… and we look forward with great enthusiasm to future years.

To those of you who go way back, Arthur Ball was synonymous with the company. He was always there - a father-figure, firm, fair and totally dedicated - treating the humblest chorus member exactly the same as an aspiring principal. Puffing away on his cigarette, jotting down notes on the back of his cigarette packet, dragging himself up and down the backstage stairs of the Pavilion when he was in great pain - putting off the much needed hip replacement operation because "the show must come first". Some of us can even remember an urgent committee meeting being held round his hospital bed when he was a patient in the old Strathallan Hospital in Owls Road, Boscombe!

One of the objects of the company is to raise funds for charitable purposes and BBLOC have been very successful in this area through their 60 plus years. Until the early 80's the money always went to Missions to Seamen but since then, the emphasis has been more on local charities or individuals with a particular need that has been brought to the attention of the company. The recipients and causes are too many to list here, but the total amount donated to date is over £60,000. 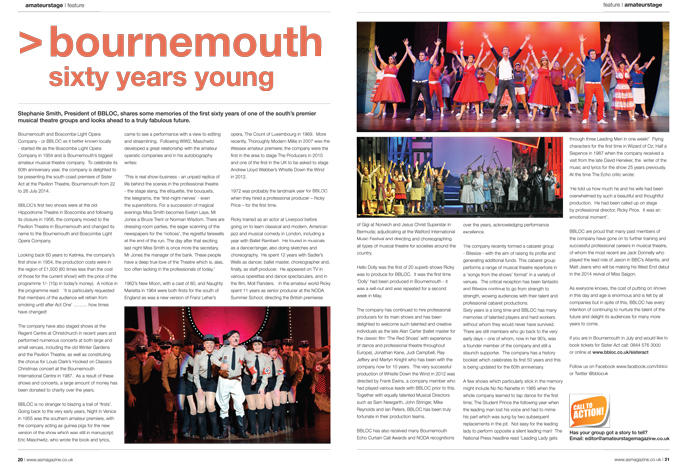 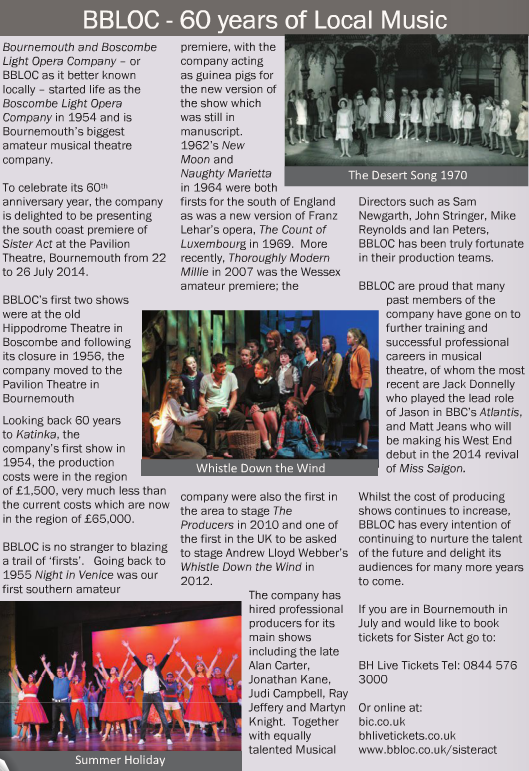